Blog post #4 in the documentation of Pathways to Freedom, a forthcoming public art project by London-based artist Julia Vogl. 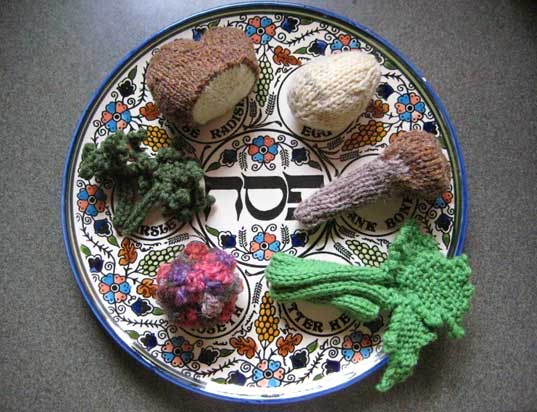 Passover and the Seder are rife with symbolism. How do you choose which ones to use to shape a visual public art experience?

To rise to this challenge I have been unpacking certain symbols. Some are encased in other religions–like the egg on the seder plate and Moses’ basket- also reminiscent of Easter. Some are beautiful but vague, with perhaps not enough Talmudic interpretation, like the reeds in the Nile  where the aforementioned basket was discovered. I am still playing with that imagery and meaning; I welcome anyone’s thoughts about it.

I started with the seder plate- but now feel that the seder plate is full of dark symbols–they all evoke hardship, depressing thoughts of endurance, enslavement, and death. At the farmer’s market they might be mean growth, health, and renewal–but on our seder plate they are symbols of darkness:

Zeroa- the shank Bone- a marker that we were passed over by the angel of DEATH—but the angel of death was in the neighborhood; that’s pretty dark.

Karpas- our innocent fresh vegetables, dipped in Salt water to remember the TEARS shed during ENSLAVEMENT.

Beitzah- the hard-boiled egg, a ritualistic offering and given as a meal to MOURNERS- and symbolic of LOSS for the two temples.

Charoset- the yummy apple, raisin, date paste we slather on matzah- well it might be tasty- but its symbolic CEMENT, reminding us of being SLAVES and doing HARD LABOUR for the Egyptians.

Maror- BITTER herbs, need I say more- its bitter! I mean horseradish can be delicious- but here it remind us of HARSH TIMES.

Charezet- another BITTER vegetable like Romaine lettuce – again reminding us of SLAVERY.

So to recap, the seder plate symbols evoke:

This may seem rather obvious,  but I think I am beginning to see the Seder like a play. I think the imagery that a plate on our table harbours so much darkness and is placed in the center at the beginning of the ritual sets the scene in tragic circumstances. It is really a challenge for everyone to acknowledge, to process, but then to soothe- will the evening end as a comedy?

In contrast the rest of the symbols of the evening are soft and some even positive- but you can read about that on my next post!