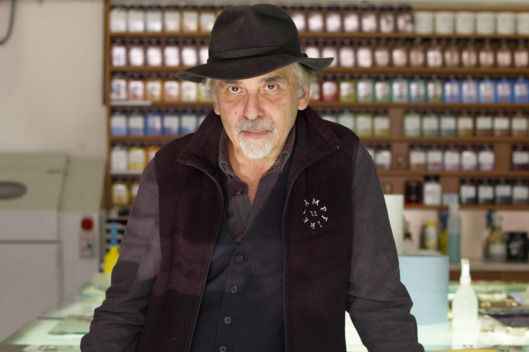 When David Stern, the Director of the Harvard Center for Jewish Studies (and Harry Starr Professor of Classical and Modern Jewish and Hebrew Literature there) told me they were bringing Art Spiegelman to Harvard and that JArts might be a great partner for the event, I became excited. After all, I grew up reading comics, and as an adult, read his groundbreaking graphic novel, MAUS. I’d seen his thought provoking, and often provocative, New Yorker covers. Here is an interesting man, and I’m looking forward to being at Harvard’s Sanders Theater on Tuesday, September 12 at 5pm to hear this intelligent, funny and complex person.

Spiegelman himself grew up reading comics (he’s called it “a gateway drug into reading”), and has been defending it as an art form—as well as “a dubious profession”—worthy of our attention. Indeed, Spiegelman’s body of work often uses comic form to plumb deep subjects—just check out “The Several Selves of Selby Sheldrake,” for instance, in a volume called Strange Stories for Strange Kids, a book series compiled by him and his wife, Francoise Mouly (Art Editor of The New Yorker). The Little Lit series they established—alternative comics for children (and very appropriate for adults) includes stories and art by luminaries such as Maurice Sendak, David Sedaris, Jules Feiffer and many others.

MAUS: A Survivor’s Tale was, of course, considered a genre changer; Spiegelman is called “the father of the graphic novel” (to which he glibly replies, “Yeah…and I’ve been asking for a paternity test ever since”). He thinks of comics (or comix, his preferred spelling) as just a medium, and MAUS tells the tale of his survivor father’s experiences in Poland, Germany and at Auschwitz. Jews are portrayed as mice, Nazis as cats in the work—fitting, Spiegelman said, because the Germans didn’t want to just murder the Jews, “they wanted to exterminate them.” His reason for writing it? “As a self-centered human being, I wanted to understand how on earth did I get to be on this planet when both of my parents were supposed to be dead.” And, he’s said, “I never expected a large audience—it was about telling a story worth telling.” It is; I hope you’ll join us to hear more from a very interesting man.

Watch an interview with Art Spiegelman on the BBC here: